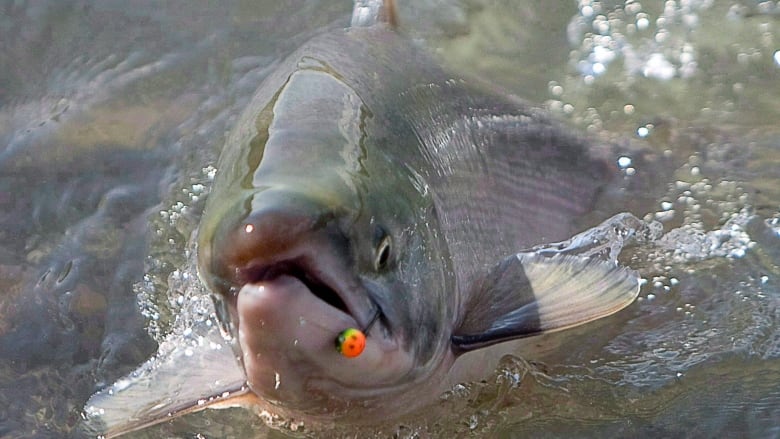 A new study used sockeye scales dating back to 1912 to estimate trends in salmon abundance in the Skeena River in northwestern B.C. (Jonathan Hayward/The Canadian Press)

A new study that suggests sockeye returns have dropped by three-quarters in the Skeena River over the last century should serve as a “wake-up call” for B.C., the lead researcher says.

The paper, published in the journal Conservation Letters, used genetic tools to trace the historical trends in sockeye populations in the country’s second largest watershed for salmon.

It pushes estimates of sockeye abundance all the way back to 1913 — previously used data only began in the 1960s — suggesting a much more dramatic decline.

The research indicates annual sockeye returns to the Skeena have dropped from about 1.8 million to 469,000 in the last 100 years, an overall decline of about 74 per cent.

“We’ve been seeing these warning signs that salmon are diminishing and yet … we continue to make decisions that are not in the best interests of salmon.”

Fisheries may be driving decline

The study relied on what Price describes as a “biological treasure chest” of sockeye scales that have been collected since 1912, before the introduction of motorized fishing boats on the river.

By following genetic markers in the DNA extracted from those scales, the scientists were able to trace patterns of abundance in each of the 13 sockeye populations in the Skeena.

Previous research had suggested declines in seven of those 13 populations over the last 50 years. Price’s team found that when they doubled that time frame, every population saw drops of between 56 and 99 per cent.

The researchers also developed a theory for why some populations have declined more sharply than others.

“What we found was those populations with historically the largest body size have declined the most, which suggests that fisheries selectivity is the most probable driver,” Price said.

He said there are likely other contributing factors, but selective gill-netting for larger fish appears to be the best explanation.

The results suggest there’s an urgent need for recovery plans for sockeye in the Skeena, as well as all salmon species across the province, Price argues.

“I’m hopeful this historical perspective provides us the information that can make more informed decisions in the future,” he said.

Bethany Lindsay has more than a decade of experience in B.C. journalism, with a focus on the courts, health and social justice issues. She has also reported on human rights and crimes against humanity in Cambodia. Questions or news tips? Get in touch at [email protected] or on Twitter through @bethanylindsay.